The ultimate meal replacement in cup form, smoothies (and their sibling juices) have taken over a new corner in the health arena as a way for consumers to pack more nutrients into their day.

The $5 billion segment has opened up plenty of opportunity for designers to help expanding smoothie/juice bar chains reconfigure their look, feel and overall brand. Tropical Smoothie and Smoothie King, two established chains, have had to reinvent themselves in recent years as they faced more competition from newer, hip and “California-cool” brands like Project Juice (with outposts in some Whole Foods stores), Real Good Juice Co., Qwench Juice Bar and many others in urban markets coast to coast that make dairy-free veganism chic.

Even the once-popular frozen yogurt cafes are evolving, introducing lines of less sugary, fresh fruit-infused smoothies with live and active probiotic cultures. Frozen yogurt chain Red Mango, for one, changed its name to Red Mango Yogurt Café Smoothie and Juice Bar, now with more than 300 locations across the U.S. with expansion plans abroad.

The general smoothie customer base seems to be expanding as well. Once reserved for just younger-generation consumers, as Millennials age, that age range has begun to include high school and college-aged students comfortably in the Z generation as well as Gen-Xers in their 40s looking to stay healthy and fit. For example, Project Juice’s co-founder Marra St. Clair says its main customer base ranges from 25 to 40 and up.

Green smoothies continue to lead the pack. The use of kale in particular has increased a whopping 400 percent over the past four years compared with other greens, according to Datassential’s MenuTrends market research. 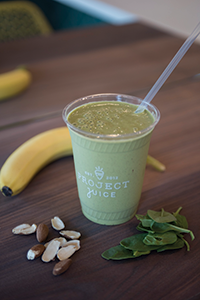 Cold-pressed juices go hand in hand with smoothies at many of these newer shops, which has an impact on both layout and equipment selection. Not only are smoothie shops reaching for high-powered but not too noisy blenders, they’re also investing in hand-cranked or machine-powered fruit and vegetable juicers and finding the need to make extra space in the front or back for staff to be able to prep all these fresh ingredients.

Front-of-the-house design is crucial to these smoothie and juice bars, which look to differentiate themselves through varying color schemes, mixed-use materials, comfortable seating and unique wall decor for an overall ambience that caters to consumers with active lifestyles and an interest in “clean,” nutritious food and drink. 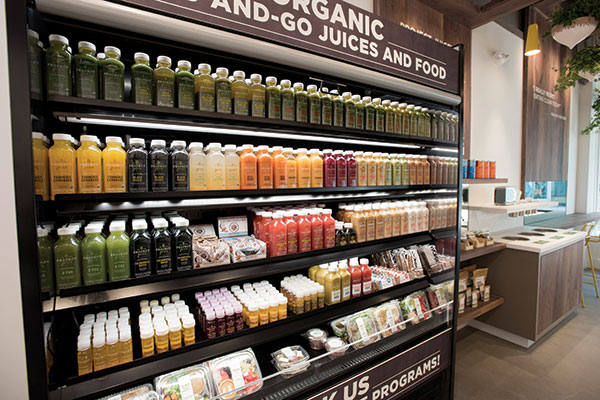 Tropical Smoothie focuses on pastel greens reminiscent of the green veggies in its blends. 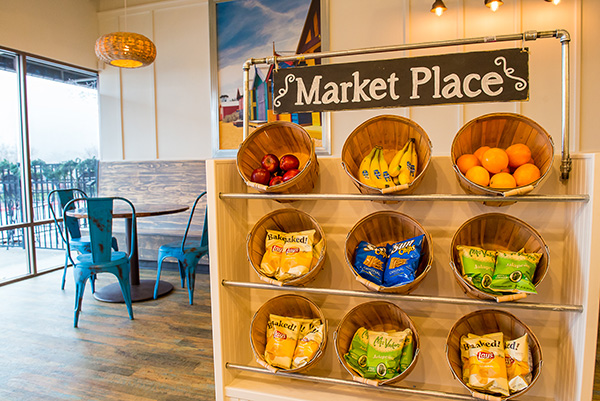 Qwench Juice Bar in California uses a 20-foot-wide raised clear bin behind the serving counter to display its fresh fruits and veggies. A misting system helps the produce stay crisp and fresh as employees grab pieces to blend.

The Chipotle Effect has made its imprint on the smoothie bar segment as it has in the fast-casual realm; many newer smoothie bars go for the uber-transparent, low-set ordering counter with wide open sight lines to the prep areas and blenders. Some smoothie bars allow customers to customize their drinks. Even more established smoothie chains have switched to this model in their redesigns.

Technology is an important piece of the modern smoothie bar puzzle. While some take the open-air, staff-driven ordering route, like at fast casuals, others use kiosks where customers can input their orders while staff members blend and deliver them with a smile at the end of the line.

Menu boards are also becoming more prevalent in smoothie bars. “We use a modular format for the menu boards, where we can change a single section of the menu without needing to replace the entire menu,” says St. Clair. “This modular format allows us the most flexibility for innovation, which is an important part of how we grow with our customers’ cravings, and we can also display our brand slogan.”

When it comes to seating, modern smoothie bars seem to offer a mix of more lounge-like, padded seats or chairs for hanging out along with communal tables meant for groups and socialization. Some have bar-top seating and spaces to get work done, but overall, smoothies are still a mostly to-go affair.

While most of these smoothie shops focus on beverage more than food, many offer retail snacks and other small bites that fit the vegan-friendly, minimally processed mold. Project Juice displays its snacks on tiered wooden shelves affixed to a chalkboard with little messages and arrows pointing to the different offerings scribbled on the wall.

“Every decision we make is with the intention of fulfilling our brand’s promise: to make people feel awesome. We aim to have a clean, warm and inviting environment where people can feel comfortable and hang out. We aim to be current, rather than trendy,” says St. Clair. 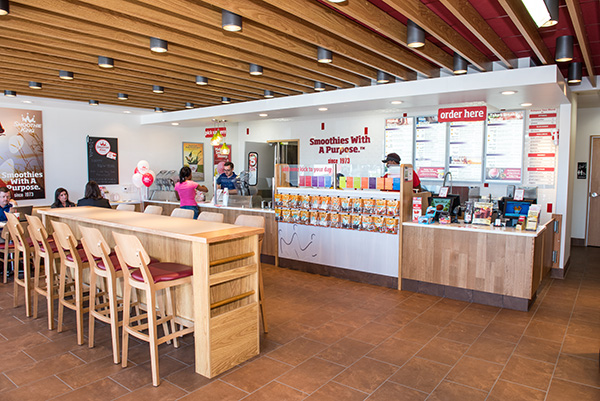 On the heels of a complete redesign in 2013, Smoothie King continues to tweak its new prototype as it expands throughout the country.

“For our redesign, we wanted to go for an authentic and completely transparent look to bring us into the current century,” Chief Development Officer Kevin King says. Since its founding in 1973 by Steve Kuhnau, the franchise company now has more than 900 units worldwide. Last year, it reported a same-store comp sales increase of 9.56 percent and has reported similar figures each year since the redesign.

Swapping out solid surface materials and laminate for higher-end glass, wood and quartz in the design also helped “amp up the quality feel,” King says. The chain also opened up its serving counter, prep areas and produce displays to play up its use of fresh product and naturally sweet fruits versus the use of corn syrup or any preservatives or additives, he adds.

Like a modern-day cocktail bar, all the blenders were moved to the front of the bar so employees never turn their backs on the customers. Undercounter and visible upright refrigerators at the front bar help keep the service line stocked during peak hours and further give customers a peek at the ingredients.

“When you turn your back to customers, they don’t really know what you’re doing,” King says. Blender containers are also rinsed on the line in between each smoothie made and fully washed every hour or so. Containers with peanuts, almonds and pecans are labeled and handled separately so that those with nut allergies can safely enjoy smoothies.

A mix of seating includes lounge chairs for “post-workout relaxation” and larger tables for more interaction or a break from the office. The chain has also leveraged technology, continuing to roll out a new online ordering app and POS system that tracks sales and other analytics.

Smoothie King doesn’t serve cooked food, but new displays positioned on wood-trimmed shelving across from the ordering counter showcase nutritious snacks. “As we’ve made changes over the years, we have learned more about retailing,” King says.

This year, the chain plans to continue its franchise expansion with a target of 125 new stores, 25 percent more than in 2016.

Since introducing a new design prototype a couple years ago, Tropical Smoothie continues to expand and show strong performance; it reported positive comp sales of 4 percent in 2016 for an increase of more than 26 percent over the last three years, according to published reports. The franchise, established in 1997, has signed agreements to develop more than 160 new cafes across the U.S. in 2017.

Walk into one of the newer stores, and the pastel green wall sconces, reminiscent of modern kitchen cabinets, and wood-topped counter seating are meant to make customers feel like they’re in someone’s comfortable, open-air kitchen.

“We changed our legacy layout in our existing stores to more of a beach-house look,” says Tom Plauche, the chain’s director of design and construction.

The majority of its existing stores have since been retrofitted with the new look to match newer units. The chain opened its 600th location this past summer.

The new prototype also relies on plenty of natural and simulated natural lighting meant to evoke a sunny, coastal atmosphere. “We’ve moved away from the thatched roof and bamboo to a softer approach with pops of bright colors and muted photographs of beach scenes and huts,” says Plauche.

Back-of-the-house food prep has since been moved completely to the front in the customer’s view to support a fresh, made-to-order approach. “Our smoothie bar is L-shaped and wraps around the production area so we have full transparency throughout the whole process,” Plauche says. “This helps invite more interaction between our employees and customers. We wanted to show that we’re using real fruits and vegetables in our smoothies, not syrups pulled out of a bag.”

When selecting the blenders, Plauche says some noise was acceptable, intended to inject more energy and anticipation into the space but not loud enough to drown out the possibility for conversation and clear ordering.

Customers can pull up a stool at the actual smoothie bar — as if they were in someone’s kitchen — or grab a seat at the mix of communal, high-top tables and banquettes throughout the space meant to cater to those looking to socialize with others or work alone. USB ports and outlets are integrated into the banquette seating to encourage customers to hang out as in a coffee shop, even if many customers still take their smoothies to go, Plauche says.

At some of the newer stores, Tropical Smoothie has begun to introduce a separate pickup station with cubbies, or open shelving, above the smoothie bar where customers can pick up smoothies they ordered online. The chain has also invested in steamers and high-speed ovens for an expanded food menu, which includes toasted wraps and all-day breakfast.